How marketing firms (or any business) can learn from Top Gun: Maverick

I feel the need, the need to succeed!

If you are as much a film fanatic as we are at Koobr, then you will understand why the announcement of a second Top Gun movie was probably the best news to have come out of 2018.

Let’s set the scene… you were 12 when Top Gun was released in 1986, it was your absolute favourite film, so much so that you dreamed of being a fighter pilot one day. You owned the original Top Gun pilot playset with the helmet and missile firing F-14, you played with it every day. Fast forward to 2018, you hear it first from a friend at work “Aren’t you a Top Gun fan? There’s a second one coming out!”. You’re now 44 and working for an accountancy firm, the memories come flooding back. You remember the exact feeling you felt watching Top Gun for the first time in the cinema, you came out feeling invincible, you could do anything, you could fly a plane one day! ‘This film might change my life’ you think.

This film is one of the most successful of all time; the original broke record numbers in profit and views back in 1986, but Top Gun: Maverick shot these straight out the water. Seeing over $474 million in total domestic earnings so far and having an increase in screens three times higher than the original during their opening weeks seems so easy, doesn’t it?

So, what can we learn from Top Gun: Maverick?

Tailor to your audience, even if that’s everyone

There are not many films which appeal to such a large demographic, but Top Gun ticks every box, fitting into a multitude of genres; action, adrenaline, and nostalgia. As well as interests; the Boeing F/A-18 Super Hornet for the fighter jet fan, the Kawasaki Z900R for the biking community, the romance between Maverick and Charlie OR Penny…Take your pick, this film has something for everyone and that is hard to come by.

As a business, you might have multiple target audiences. It’s important to put yourself in the shoes of each audience, consider their motivations and feelings, and then tailor each communication to push the right button and tug at their heartstrings.

“Just a walk in the park, Kazansky”

But why is this film so important to marketing? Well, firstly, it has been a long time coming… The announcement of a second Top Gun first happened in May 2018 when Tom Cruise tweeted “Day One” with an image of what looked like Maverick. This element of surprise caught everybody off guard, four decades later and they decide to make another film?! A tweet like this from the main character caused mystery, excitement, and anticipation but most importantly, conversation and exposure for the film.

This was only the beginning.

In July 2019 the first marketing poster was released, an image of somebody with their back turned, wearing a jacket covered in old fighter pilot badges, slowly building up that tension. It wasn’t until December 2019 that the official trailer was released, and then, we were hit with the pandemic. 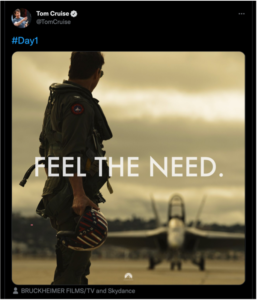 Take advantage of the setbacks

The pandemic resulted in many setbacks for the film industry including delayed release dates, with the film’s original announcement date being July 2019 but Covid added three years to its first showcasing. However, the marketing team took advantage of this and used it to further advertise and promote the film. For example, Cruise and the cast took part in a global premiere tour, and countless on-screen interviews with the stars before the official release have further increased audience anticipation.

Co-branding at its finest

There have even been some joint promo efforts between Top Gun and huge companies such as Porsche, taking advantage of the nostalgia and long-standing association with the car brand. The advert contained excerpts from the film as well as the theme tune and the tag line “Porsche and Top Gun together again”. What a way to showcase the car brand and further promote the film!

The opportunities to advertise this film seem endless, I mean who would have thought, a pilot barbie doll? 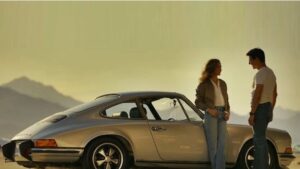 Perfection takes time … use it!

The element of surprise and anticipation was the first strong marketing factor this film had. Nobody saw it coming which made it so much more exciting. The slow tension building added an element of thrill, alongside the advertising with the posters and the teaser trailer.

One marketing element that stands out in this film is timing; it took four years of marketing and advertising before Top Gun: Maverick was released. Granted, the pandemic extended the release date. However, the film takes full advantage of this extra time to advertise this film in as many possible ways. When it comes to marketing your product or service, take advantage of everything at your disposal, even the setbacks and “remember, boys, no points for second place”.

If you are looking to lead and win with marketing, we can help!

At Koobr we are a friendly bunch of skilled individuals, well versed at spotting opportunities, gaining exposure, and helping you to get the right message to the right people. If you are looking for a new marketing partner, why not get in contact to book a Koobr Kuppa and a chat.

Back to the Kooblog page

Don't miss out! Get our monthly newsletter with the best informative and amusing articles from our blog. Don't worry, you can unsubscribe any time.

Want to hear more from us? Then here's some of our favourite hangouts...

1 St James Court, Friar Gate, Derby, DE1 1BT
This site uses cookies to distinguish you from other users and enhance your experience. Find out more.