Should you be using emojis in your marketing?

As a millennial (someone born during or after 1980), emojis play a large part in how I communicate with others digitally. However, as a marketer, I approach their use differently.

In fact, I could probably have a conversation with my best friend using only emojis and still be able to hold a reasonably coherent conversation.

When you think about it, that sounds pretty crazy doesn’t it?

Whether you like it or not, emojis have almost become their own language amongst young people, and are in themselves also used as a new type of slang. Apple increased emoji size by 300% last year and also finally allowed consumers to enjoy emojis in the skin tone of their choice. They’re certainly not going anywhere.

Instagram found this interesting correlation between the use of slang and it’s replacement with emojis – highlighting further that emojis are fast replacing written word (even though some wouldn’t consider ‘lmfao’ a word – you get the picture). 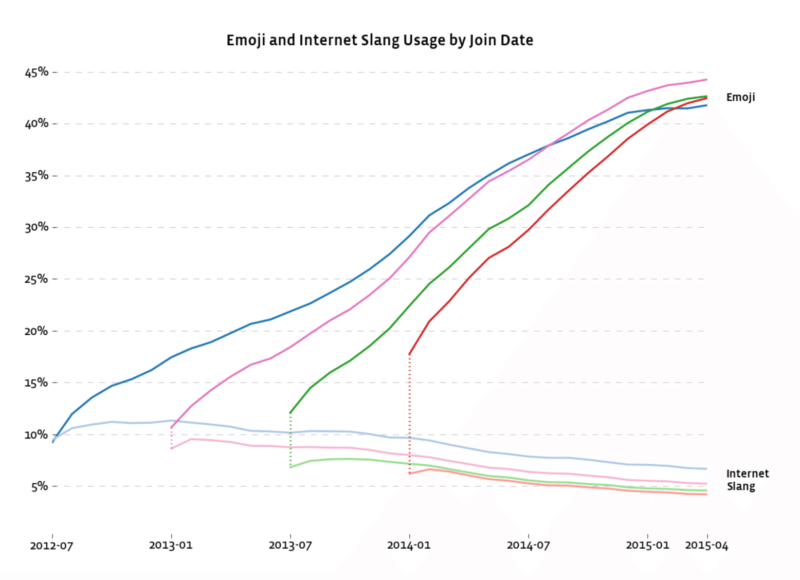 In hindsight, replacing text with emojis was only going to be a natural progression that millennials would use to maximise on their 140 character world.

At the very least, the inclusion of an emojis can massively alter the way that digital messages are perceived.  A similar example of how symbols can affect the way a message is read is the use of ‘x’ in a text message or email. Virtual kisses. Personally, if a friend didn’t include one to me, I’d think I was in big trouble. I wouldn’t necessarily expect ‘xxxx’ at the end of a promotional email – unless that kind of informal communication was part of their brand personality.

“If you are talking to someone face-to-face, you don’t need an additional word or symbol to express “I’m smiling” because you would, presumably, be smiling.”

(as displayed on iOS devices)

(does this really need explaining?…)

Anything that can add to a message will be picked up by marketers – if we can say the same thing in 3 emojis rather than a tweet, why wouldn’t we? But should we, though?

• The person posting misunderstands the context
• Potentially annoying/confusing to the wrong audience
• Intent isn’t always obvious to the customer, even to millennials
• Emojis display differently across platforms
• May make your brand seem unprofessional

Although no emojis were actually used in this instance, Hillary Clinton’s social media team encountered the wrath of Twitter’s millennials when they posted the following: 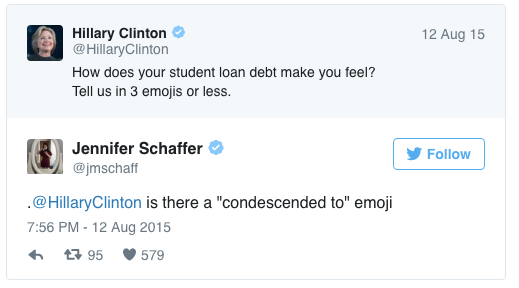 Don’t use emoji’s (or ask others to use them) when discussing something serious. Ever.

If you’re going to use emojis as part of your marketing efforts, you need to be sure that your target audience is going to be receptive of them. Even taking millennials as an entire group wouldn’t be such a good idea. A 36 year old won’t necessarily understand the social connotations of certain emojis the same way a 22 year old would. Don’t even try and use them unless you’re totally aware of the connotations of certain emojis (🔥 💯 💦 – to ‘name’ a few).

One of the single most important things to consider when using emoji, is what your emojis are going to look like on different devices. For some reason, many emojis display very differently to their most commonly used Apple counterparts. Things could get very awkward if you don’t make sure that all displayed icons are suitable.

I doubt any of the great literary icons would be thrilled about language being replaced by tiny drawings of painted nails and sushi, but the linguistics of the digital world are rapidly changing and evolving.

They say a picture is worth a thousand words, and with emojis, that gives you over 1.8million to play with.

Back to the Kooblog page

Don't miss out! Get our monthly newsletter with the best informative and amusing articles from our blog. Don't worry, you can unsubscribe any time.

Want to hear more from us? Then here's some of our favourite hangouts...